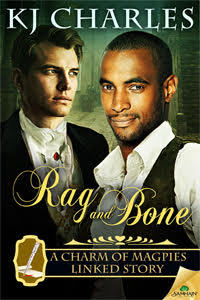 It’s amazing what people throw away…

Crispin Tredarloe never meant to become a warlock. Freed from his treacherous master, he’s learning how to use his magical powers the right way. But it’s brutally hard work. Not everyone believes he’s a reformed character, and the strain is putting unbearable pressure on his secret relationship with waste-man Ned Hall.

Ned’s sick of magic. Sick of the trouble it brings, sick of its dangerous grip on Crispin and the miserable look it puts in his eyes, and sick of being afraid that a gentleman magician won’t want a street paper-seller forever—or even for much longer.

But something is stirring among London’s forgotten discards. An ancient evil is waking up and seeking its freedom. And when wild magic hits the rag-and-bottle shop where Ned lives, a panicking Crispin falls back onto bad habits. The embattled lovers must find a way to work together—or London could go up in flames.

This story is set in the world of the Charm of Magpies series.

Fra: So, KJ Charles is without the shadow of a doubt at the top of my auto buy list.-her novels swing from effortlessly delightful to full blown magnificent.

Rag and Bone is part of the Charm Of Magpies universe and it expands on a short story Charles wrote for the Charmed and Dangerous anthology last year and focuses on Crispin, the “reforming” warlock and Ned the waste-man.

I adored these two in the anthology and was really looking forward the full length novel about them: you guys, it was worth the wait and I most certainly enjoyed it.

Karen: I feel the same, KJ Charles was one of the first authors I started to read when I started to read romance again at the tail end of 2013, and one of the very few writers I have read all of. In my view her writing goes from strength to strength.Her books are both terrific fun to read, and also address serious issues without being unduly preachy and yet completely make their point.

Fra: What I love about this series is the urban fantasy/historical setting. It allows the author to play with her lovingly researched historical London and give it an extra dimension which compliments it rather beautifully.

There’s an understated elegance to this book, it reads easily and yet it packs quite a deep and meaningful narrative and message.

Karen: At the heart of the book is the love story between Ned and Crispin, it was understated and quiet, and contrasted beautifully with the drama that was happening elsewhere in the book.

On one hand you have this quiet and tender love story, then a magical murder mystery all woven in with ideas about status and prejudice. KJC had such a deft touch with this that the book is effortless.

Fra: The thing is I think that KJ Charles’ research into her settings make the inclusion of diversity feel woven into the narrative instead of some sort of tacked on as an afterthought. I mean Ned feels real: his language, the detailed description of his trade and the intimate knowledge of his own situation within the historical context he inhabits make him real as opposed to many POC characters who feel like the author is paying lip service to an issue rather than expressing a will to include more diversity in their stories.

Crispin I adore: his desperate need to fit in and shake the terrible burden of betrayal and yet the quiet knowledge that he is different and that fitting in is in fact bending his nature further than he is willing to do.

In a way I thought that Crispin represented a metaphor for writers: his magic must be written down, the words he writes alter the world and the perception of it but he is in constant struggle with his magic – for his spells to work he must draw blood _ a very visual rendition of suffering for your art, really.

In fact I do think that the whole book – including Ned’s profession- is like an ode to writing as magic. A writer’s work like a conjurer’s.

So overall for us KJ Charles writing is going from strength to strength, her prose flows and her narrative is always sustained by loving and detailed research. The urban fantasy elements counterpoint the historical settings beautifully and she is never afraid of tackling serious issues and does so without turning either her books nor her characters into mouth pieces.